Disclaimer: The dungeons in Warhammer Quest: Shadows Over Hammerhal are not randomly generated like they are in Silver Tower but rather are set and remain the same over multiple games. As such, there are possible spoilers some of the dungeons here, although the exact tile setup and solutions to the puzzles will not be mentioned (it might be seen in the pictures though).

Alright, first attempt at this ‘battle report’ thing, although what I’m reporting on wasn’t a battle as such. I ran the new Warhammer Quest at my club last night and it went down very well. Fun and banter flowed freely, vile creatures were dispatched and some beautiful treasures were discovered. We join our heroes as they prepare to enter the dungeons on the trail of the Lord-Castellant’s loyal gryph-hound Archimaine. 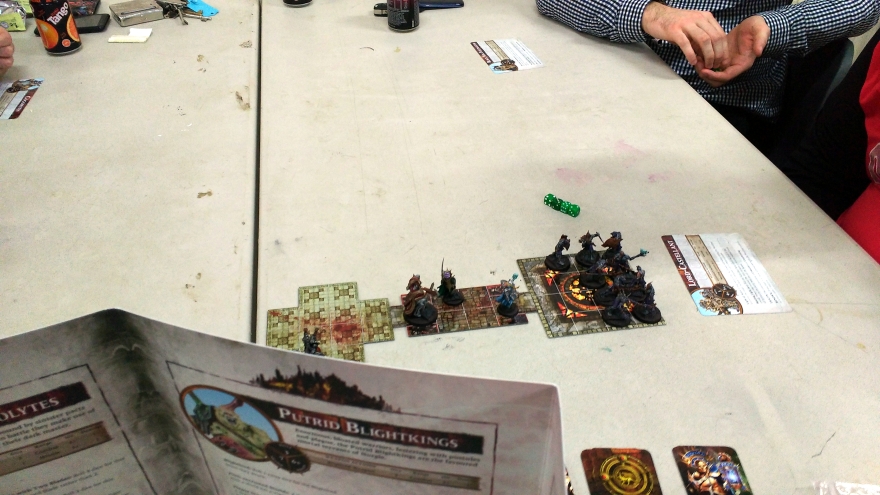 The party made their way down the staircase discovered by the Cogsmith in the desecrated shine. Air currents and strange scents wove past their heads, and they could hear noises from the dark below. At length, they reached the foot of the stairs and found themselves in a crossroad-chamber with doors at all of the compass points. The flagstones near the exits to the north and east seemed worn by constant use.The Elven Loremaster moved towards the easternmost door and opened the portal, discovering a Kairic Acolyte standing guard. In the ensuing scrap, the eager Fleetmistress suffered a wound. After the combat was over, the Cogsmith could hear the sounds of several people talking from behind the eastern portal.

When the door was opened, a foul space was discovered. Both a shrine to their dark gods and a barracks, 9 Acolytes filled the room. The Lord-Castellant strode in, following the Fleetmistress who, true to form, had rushed in – eager to get to grips with the enemy. The ensuing combat seemed to be going badly for the heroes until the Lord-Castellant used his Warding Lantern. The Holy Light of Sigmar flooded the chamber, stunning the craven cultists. The Loremaster entered the room and flung an eldritch blast from her outstretched hand, consuming one of the acolytes in a blaze of green fire. The Fleetmistress and Lord-Castellant laid in with their weapons, hacking apart the cultists in a welter of gore. The Cogsmith stayed in the doorway, struggling to get his mighty dwarven Grudge-Raker gun to fire. At length, the cultists were reduced to piles of bone and meat, although the Fleetmistress was now more heavily wounded than before. The Cogsmith moved forward and opened the door in the room, revealing an empty corridor. 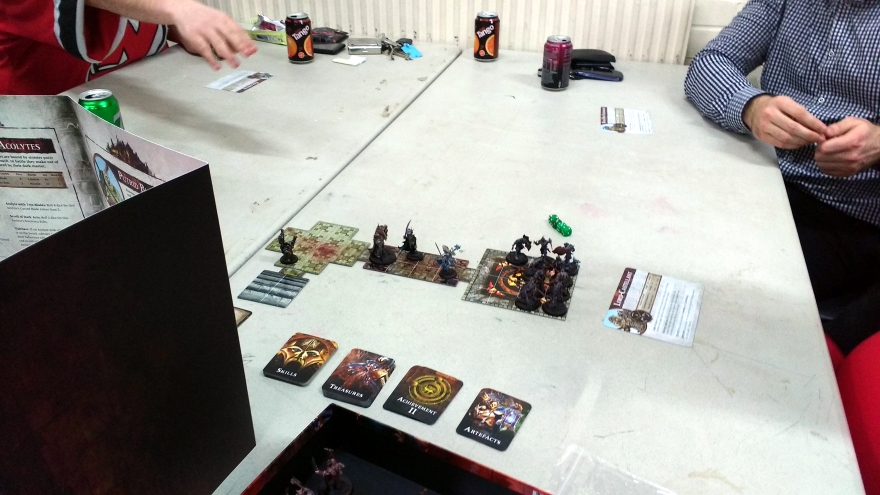 The party moved down this seemingly empty space, lit with flickering torchlight from the braziers on the walls. The Loremaster reaches the end first and opens the eastern door, revealing a stairwell that leads up and down. The party decide to continue exploring and she moves to the western door and opens it, revealing an empty chamber. A faint acrid scent hangs in the air, but it seems breathable enough. The rest of the party move into the room save for the Cogsmith, still struggling with his weapon. The Loremaster searches the room, looking for clues as to their situation, but inadvertently triggers a trap!

The exits to the room slam shut and the chamber fills with a potent and damaging gas.The Lord-Castellant seems unaffected but the Loremaster is wounded and the Fleetmistress is now in a very bad state indeed. The heroes scrabble to disengage the trap before they all suffocate and succeed in doing so.The doors open again and the Cogsmith leans in, before spluttering at the stench and retreating back into the empty corridor.

The Loremaster, now confident she can find the secrets this room hold, searches again. Unfortunately for her, the only secret this room holds is a choking death. The doors slam shut again and the foul gas once again descends. This time only the Lord-Castellant is wounded, the elves seemingly having learned to hold their breath. The Loremaster is told in no uncertain terms to stop searching the chamber, and after a little break for the Fleetmistress and Lord-Castellant to tend to their injuries, she opens the door.

The room is empty again, save for a trail of blood leading to the western portal. Her impetuosity showing through, the Fleetmistress runs into the room, only to be impaled upon a spear trap! She hangs there, gasping in pain, until the spear slowly recedes back to where it came from. A quick search of the room by the Cogsmith discovers nothing and the Fleetmistress moves to the door at the end of the room, followed by the rest of the party – who are very careful not to tread where she trod.

The Loremaster  opened the portal, finding a room with a dead body sprawled in the centre. A trail of blood lead from the body to the door he had entered by. Searching the body, the Cogsmith found a piece of gold and secreted it away amongst his person – such are the ways of Dwarfs. The party, moving through the chamber and the door at the end are confounded to discover that they are back where they started, in the crossroad-chamber!

This time the Loremaster opens the western portal only to discover four Kairic Acolytes standing guard over a portal. Spotting the heroes, they draw their blades and charge. The Loremaster, Fleetmistress and Lord-Castellant enter into combat, with the Cogsmith remaining at the entrance fiddling with his firearm. Blows are exchanged, until a satisfied dwarven grunt is heard and the Cogsmith enters the chamber, firing shot after shot from Grudge-Raker in an act of multi-barrelled mayhem! As the stink of cordite and the smoke recedes, the adversaries are revealed to be slumped against the walls, their blood decorating the mouldering stones. The Lord-Castellant motions for quiet and listens intently. He can hear whimpering coming from behind the southern portal.

The Loremaster opens the door and sees a prisoner, bedraggled and bloody, manacled to the walls of the chamber. He gasps that he is Brother Bargo Culven and begs the noble elf mage to free him. With a slight manipulation of the magical energies surrounding him, the elf shatters the chains that bind the man to the walls. He falls to the floor and then straightens. He is clearly very relieved and asks the party to visit him at the Chapel of the Shattered Blade that he may thank them properly. With that, he hobbles out of the dungeons towards the stairs the heroes entered by. The Cogsmith searches the prison chamber while the Fleetmistress complains about here wounds to the other party members.

He finds a loose brick that seems to have worn a groove in the bricks below. Pushing it, a hidden doorway is revealed. An ancient staircase lies beyond – cobwebbed and covered in a thick layer of dust, it appears to have lain unused for decades. The party decide to descend and discover what lies in store… 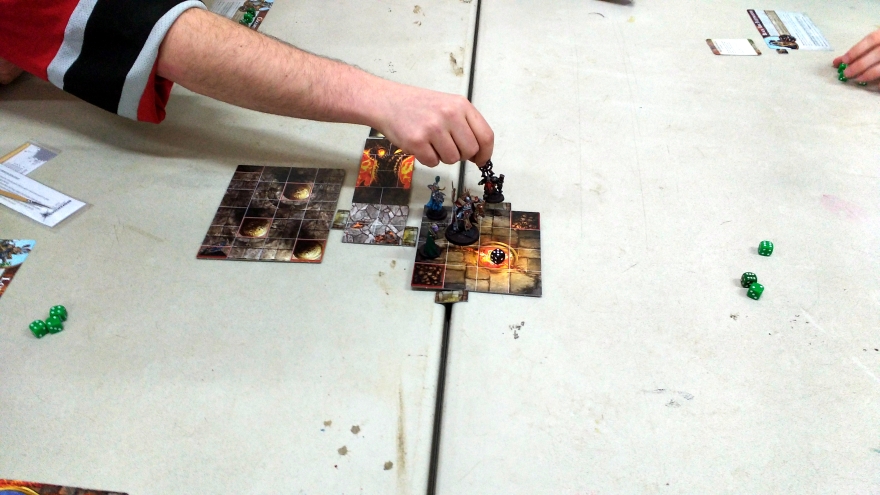 Alright, that’s it for today. I’m very tired and the above probably switches tenses distractingly but I can’t find the energy to write it again. I may relate more of this tale tomorrow. Thank you for reading.

Into the Sea of Souls

Detailing A Journey Through The Warhammer Universe

Escaping back to fantasy

The deep, dark horror of the Table top

One mans fight against the plastic crack, more commonly known as miniature wargaming!

A futile fight against entropy or 'Every man should have a hobby'? Either way it is a blog on tabletop wargames, board games and megagames

Miniature projects in many scales and periods, and likely a few digressions.

The Lost and the Damned

High times on the Eastern Fringe

A 40k blog of adventure and heresy.

Leadballoony - It's a lead thing

A blog about KrautScientist's wargaming exploits

"All I ever wanted was the truth." - The Book of Lorgar